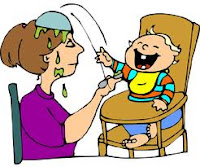 We were receiving similar questions about solid food for babies under 6 months. Parents were asking like when to start solid food, what o give, is it harmful for babies etc.

Parents are being advised not to introduce solid foods for their babies until the age of six months in order to prevent life-long food allergies from developing, a leading nutritional expert said.

Eating solid foods at an early age strains children’s vital organs and causes a preference for sugary foods that can lead to subsequent weight gain, said Dr. Carla, lecturer of nutrition and diet at the  American University of Beirut in Lebanon.

“In my own practice, I have seen a 50 per cent increase [in recent years] in the number of children suffering from food allergies or related respiratory and skin conditions. I believe this trend is mirrored across the region, with many parents introducing solid foods for their toddlers at the tender age of three months”

She was speaking on the sidelines of the 11th Women’s Conference,  which focused on correcting poor eating habits.

Doctor explained that parents often induce children to eat solid foods at a young age because it is convenient, or because parents want to share their meal times with their babies.

“However, once children are fed sugary or salty solid foods, they start craving the empty calories in many food items. This is why sugary foods should be avoided till at least the age of two years,” she said.

The nutrition expert recommended that children be introduced to solid foods one by one, so that any harmful reactions can be detected immediately and the food stopped if required.

“Cereals and vegetables should be given first, with fruits high in sugar content being introduced later,” Doctor said.

Experts also shed light on various health concerns, such as the alarming increase in obesity, which has doubled within the past decade, across the Middle East.

“For example, the lack of zinc in the diet from eating genetically modified plant-based products can lead to stunted growth, diabetes, skin ulcers and diarrhea in children. Because many organs do not exhibit symptoms of poor eating immediately, people should try to limit their intake of modified foods, and also work to maintain balanced diets at all times,” he said.